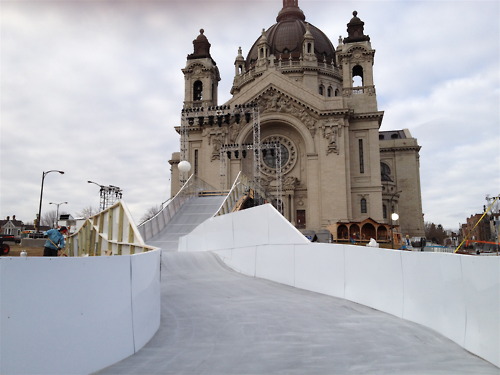 The crazy sport of ‘Ice Cross Downhill’ is returning to St. Paul beginning Friday, January 25. The steep, icy course starts next to the Cathedral of St. Paul and swoops over the steps of the Cathedral, up a 16 foot wall and over multiple bumps. And the athletes race along the track wearing ice skates. It’s just about the craziest race you’ll ever witness. One of the great things about living at Eagle Ridge Apartments is our proximity to events in the Twin Cities like Crashed Ice.
The event runs from January 25 to January 26, check out the website here for times for elimination rounds and the final race. Last year was the debut of Crashed Ice in the United States and the race course returns to the steps of the Cathedral for the 2013 season. The event draws competitors from across the country and the world and some of the top contenders are from Minnesota. The Crashed Ice race in St. Paul is just the first of a series of international Ice Cross Downhill competition; cities in the Netherlands, Canada, and Switzerland also host a Crashed Ice event.