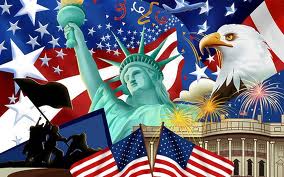 Did You Know? There Are More Holidays in July than Just the 4th!

July Holidays
July 4th– Independence Day
We all know what this one is, and many of us look forward to it all year! Independence Day is a day to commemorate the adoption of the Declaration of Independence.  The Declaration was signed on  which declared the â€™s independence form the .  Throughout the , there are many celebrations held in most cities which typically include fireworks, parades, armed forces ceremonies and carnivals. How did you celebrate? July 15- Tapioca Pudding Day
No questions about what you are supposed to do this day,  TAPIOCA PUDDING!  Tapioca pudding is a great treat for a hot summer day.  If you havenâ€™t tried tapioca pudding, go ahead and try it today, the most common flavors are vanilla and chocolate.  Fun Fact: Tapioca is made from the starch of a cassava root; the starch forms tiny soft balls in the pudding which gives the pudding a unique texture. July 19- Flitch Day
Flitch Day is a holiday that is rooted in an old English custom.  Since the year 1104, any married couple that could prove via a trial that they had been faithful and loving to each other for one year would win a prize of sorts.  The prize was a half of a pig which at the time was called a flitch of bacon.  Supposedly this is where the term â€œbring home the baconâ€ originated.  Even to this day they hold flitch â€œtrialsâ€ but now they only hold the trials once every four years. July 20- First Day of Ramadan
Ramadan is noted as an Islamic tradition.  It is known as one of the 5 pillars of Islam and is a mandatory fasting period.  Muslims believe this month is a month of revelations of God to mankind because the first verses of the Qurâ€™an were written by the Islamic prophet, Muhammad during this time. July 22- Parentâ€™s Day
Founded in 1994 by Former President Bill Clinton; Parentâ€™s Day was established for “recognizing, uplifting and supporting the role of parents in the rearing of children.” So celebrate, parents! Important Days in History for the Month of July:
opened in , 1955
Amelia Earhart and her airplane were lost in , 1937
The first All-Star baseball game was played in , 1933
The first man (Astronaut Neil Armstrong) to set foot on the moon, 1969
Bank robber John Dillinger was shot and killed by F.B.I. agents outside a  theatre, 1934
Benjamin Franklin became Post-Master General and the Postal Service was established, 1775