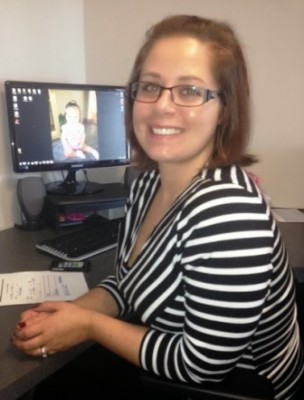 Julie, the property manager at Salem Green, is celebrating her eight-year anniversary with Condor Corporation. She started her career at Salem Green in 2005 as a Leasing Consultant and won the Maddox awards in 2008. Julie was promoted to Property Manager at Raven Hill, a Condor Corporation community in Burnsville. Julie was at Raven Hill for four years and then returned to Salem Green in August 2012 as the manager.
When asked what her favorite part of her job is, Julie said, â€œDoing her best to make the residents happy and to continue to call Salem Green their home.â€ Whenever Julie has any free time she likes to spend time with her beautiful daughter Josie (aka Josie Poo and Josie Potato). Some of you may have seen them walking the hallways in the morning or hanging out in the office at Salem Green.
Thank you for being such a valuable member of the Condor Corporation and Salem Green teams, your contributions and hard work are truly appreciated. We look forward to many more years of your success with Condor Corporation.