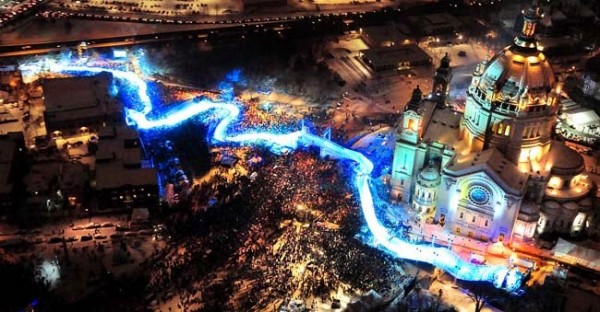 Head to St. Paul This Weekend to Watch the Crashed Ice Races!

We might as well have some fun with this wintry weather, right? This weekend you can witness some daring feats of bone-headed courage and superb skating skills as the Red Bull Crashed Ice event kicks off for its third year in St. Paul.
The sport of “ice cross downhill” is a worldwide phenomenon, with major events hosted annually across Europe and North America – and there’s one right here in our backyard! Our local Crashed Ice event takes place at the Cathedral of St. Paul in downtown St. Paul, which is just a short drive from Lexington Heights Apartments. So, if you’re willing to brave the cold you can go see the event this weekend in person, or check out the information below for coverage of the event on the web and on TV. If you are more inclined to stay warm and cozy while watching, stop by the Lexington Heights Clubhouse and watch it on the big screen in our newly remodeled and furnished TV Lounge!
Here’s some more information about this event from the Red Bull Crashed Ice website:

The sport of ice cross downhill continues its residence in the ‘State of Hockey’ with a third visit to the capital of Minnesota in 2014 as the sport continues to grow in popularity with US fans.

For the past two freezing-cold winters, Saint Paul has hosted ice cross downhill competition, with a huge crowd of more than 100,000 people converging on the Cathedral of Saint Paul to witness the high-speed action that features skaters competing in four-man heats in a race to the bottom of a 400-metre-long track full of obstacles.

Watch the second race in the Ice Cross Downhill World Championship 2014 live on redbullcrashedice.com, powered by Red Bull TV, from 2am (CET) on Sunday, February 23. Please note that this live webcast is geo-blocked in the US. The event will be broadcast nationally for the first time on Fox Sports 1 on Monday, February 24, at 9.30pm (ET) / 6.30pm (PT).