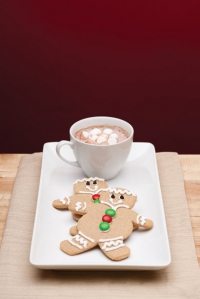 Toys need not be made of plastic or found on department store shelves in shiny boxes, according to Kay Wiens, a Maple Grove mother of three boys. Wiens, the proprietor of Kayâ€™s Confections, says toys can start with flour, water, sugar, candy and creativity.
â€œItâ€™s not a toy from the store; itâ€™s from the kitchen,â€ she says of those ingredients she turns into cakes resembling rollercoasters, volcanoes and race tracks as well as gingerbread structures looking like castles, nativity scenes and, of course, houses. â€œThatâ€™s what I want the boys to realize: baking isnâ€™t just of girls. You can create anything out of flour and sugar.â€
Wiens and her identical twin sister, Karen, began making gingerbread houses when they were 13. They wanted to give something cute and inexpensive for Christmas to the seven families they babysat. â€œThey wanted toys, and were used to getting them, but they were better than toys because you could eat it,â€ Wiens says.
In following years, the sisters made train engines and sleighs. Once college rolled around, the Wiens werenâ€™t too cool. They kept the hobby alive and entered their confections into the Wright County Fair in western Minnesota. Kay earned an elementary education degree in college and brought baking into her classroom. â€œThey would bring candy and we would pool it together,â€ she says. â€œIt was fun to see the creativity from the kids.â€ Kay stopped teaching to raise a family, but the confections continued with holiday houses for neighbors on her street in Maple Grove.
â€œI came to the conclusion that I was going to do the same thing at (age) 40,â€ she says. â€œTheir reaction was the same. They light right up. Their eyes sparkle. They love it.â€ At one of her sonâ€™s birthday parties in 2007, Kay made a volcano cake complete with homemade lollipop candy as lava. â€œThatâ€™s how it transpired; people wanted to buy them,â€ she says of the serendipity. Kayâ€™s neighbor, Suzie Strangis, has bought two cakes â€“ one based on hockey and the other on a roller coaster. â€œIt was really great, beautiful, well done,â€ Strangis says. â€œIt tasted good, too.â€
Kayâ€™s Confections now takes about two orders per month. She will make larger display cakes ($100-150) to smaller cupcakes ($2) to cookies ($1.50). â€œThis is such a passion for me,â€ she says. â€œYou can take grocery store ingredients and turn them into 3D things that are lifelike. â€¦ It makes people go, â€˜wow.â€™ â€ You can start to satisfy your sweet tooth by reaching Kay Wiens via email at www.kaywiens@juno.com or 763.416.3961.
To see a nature-themed confection from Wienâ€™s and her identical twin on display, visit the Minnesota Landscape Arboretum in Chanhassen from mid-November through mid-December.
For frosting, beat together 1 bag powdered sugar, 6 egg whites and 1 tsp. cream of tartar for 12 minutes, until still peaks form. Refrigerate covered with plastic wrap until ready to use.
(This story reproduced from MapleGroveMag.com)