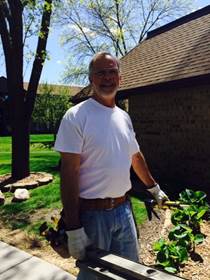 Robert is part of the Condor construction crew, who are primarily responsible for making sure all of the company’s communities are well maintained and cared for from a construction standpoint.

Robert started working for Condor Corporation in 1972 as a construction foreman for our sister property Lexington Heights Apartments (Mendota Heights), and he assisted the foreman in building Eagle Ridge! He left the company in 1972 to work on various other projects, and then rejoined us in 1983 and has been working for Condor ever since. Out of all of the companies — both small and large — Robert has worked for, he says family-owned is the BEST!

When he’s not working, Robert loves to fish. He also has three daughters and six grandchildren, so he spends lots of time with family. If you see Robert around the property, say hello (unless he’s on a scaffold)!