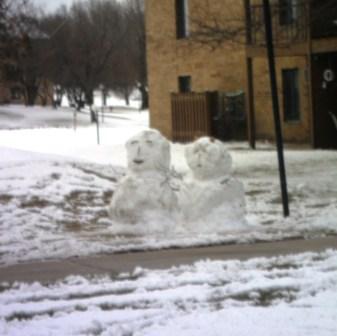 Lexington Heights has two new residents! They moved in during the beautiful snowfall on New Year’s Eve. You can meet them by venturing to the front lawn of the 2300 building. You might not want to “warm” up to them too much, though, in fact they probably would appreciate a more “frosty” reception! The world’s largest snowman was actually a snowwoman! She was built in Maine in 2008, and stood 122 feet 1 inch tall. She was named Olympia Snowe in honor of a Maine U.S. Senator.  Before that Maine’s largest snowman Angus, King of the Mountain (named after the then Governor), was only 113 feet 7 inches but weighed over 9,000,000 pounds. Lexington’s snowpeople might not win any awards but, lucky us, we don’t have any snow to work with!