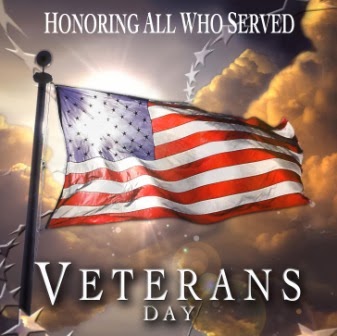 November is an exciting month! It is the start of the holiday season and everyone seems to be traveling somewhere. All of these holidays can bring added stress as we prepare for them, but they are also occasions for joy as they are great opportunities to spend quality time with those you love. We’ve already passed two big days: All Saints Day and the end of Daylight Saving Time – but there is so much more coming in November.

Here’s your list of reasons to celebrate this month Originally called Armistice Day, we celebrated the cease fire that ended the â€œGreat Warâ€ now known as The First World War (WWI). The war ended on November 11th 1918 at 11:11 (11/11 at 11:11). The first official Armistice Day was observed with the U.S., England, and France each burying an unknown soldier at 11:11 on November 11th 1921. President Eisenhower changed the holiday to Veterans Day in 1954, as a national holiday to honor all of our U.S. soldiers who have valiantly served or died in any wars or conflicts. No need to wait another month and a half to start your New Yearâ€™s resolutions. Since 1977 The American Cancer Society has been encouraging all smokers to snuff out the cigarettes on the third Thursday of November. With a short term goal of extinguishing the â€œbuttsâ€ for one day, their obvious long term goal is to give smokers the boost to kick the habit for good.

Wow, thatâ€™s early! Hanukkah is in November this year! This holiday begins on the evening of November 27th and lasts until Thursday, December 5th. The fact that it overlaps Thanksgiving is actually quite unusual. It’s so unusual that it’s not expected to happen for another 77,798 years. This has prompted some Jewish Americans to combine the two holidays and dub it “Thanksgivukkah.”

Hanukkah commemorates historical events that took place in 168 B.C. According to the Talmud, one of Judaismâ€™s central texts, Judah Maccabees and the other Jews who took part in the re-dedication of the Second Temple witnessed a miracle. Even though there was only enough untainted olive oil to keep the menorahâ€™s candles burning for a single day, the flames continued flickering for eight nights, leaving them time to find a fresh supply. This wondrous event inspired the Jewish leaders to proclaim a yearly eight-day festival. The first Thanksgiving was 1621 between the Pilgrims and the Native Americans. The feast lasted 3 days and was a time to be thankful for a bountiful fall harvest, and to thank the natives for their kindness. Thanksgiving as a national holiday today has evolved quite a bit over the years. The Continental Congress declared the first national Thanksgiving holiday in 1777 following the American Victory at Saratoga. In 1789 George Washington was the first President to proclaim a day of Thanksgiving. He set aside November 26th (a Tuesday not a Thursday) as a day to thank God for our new Constitution.

A shoppers dream (or nightmare)! Black Friday seems to be starting earlier and earlier each year. This day is called Black Friday because many retailers operate in the red, or in debt all year long, that is until the Holiday shopping season where there ledgers are finally in the black.