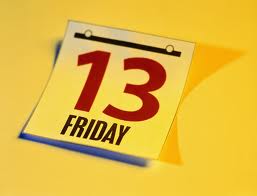 Superstitions surrounding Friday the 13th comes from many sources, one being derived from the Last Supper and a Norse myth that having thirteen people seated at a table will be the death of one of those people. Friday the 13th has been considered unlucky by some since the 14th century. Friday has also been considered unlucky because according to Christian scripture Jesus was crucified on a Friday. Many myths consider the 13th to be an unlucky day to travel or begin new projects. Black Friday has historically referred to stock market crashes and other major disasters since 1869 when the gold market crashed on a Friday and subsequently caused the stock market to crash.

The media plays a role in promoting this fear in society. Each year we see horror movies centering on Friday the 13th being released, and this fear is often featured in the news.

The fear of Friday the 13th is called Friggatriskaidekaphobia (Frigga being the name of the Norse goddess for whom “Friday” is named and triskaidekaphobia meaning fear of the number thirteen). There are an estimated 17 to 21 million people in the US that are afraid of this day. Some people have so much fear of Friday the 13th that they avoid their normal routines in doing business, traveling and even getting out of bed. Because of the lack of people traveling it has been estimated that $800-$900 million dollars are lost in business on this day.

The good news:
Because of the lack of travel and other activities on this day, it has been reported that there are fewer accidents and reports of fire or theft on Friday the 13th.