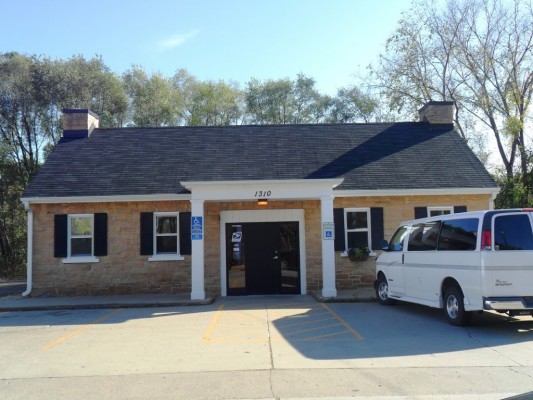 Historical information about this unique and tiny post office from southwestreviewnews.com:

Mendota was founded in 1853 and traces its roots back to Henry Sibley. Its first post office was established in 1854, according to Nowacki.

Mendota’s location was an independent post office until 1972, when it became a branch of the St. Paul post office. Mielke said he understands the post office has been in five or six different locations over the years.

Post office clerk Mike Schletty said the post office has been in its current building since 2000. He recalled speaking with the original owner of the building who constructed it as a gas station and convenience store back in the 1960s, and that it was intended to honor the look of the original Sibley House. Schletty said the owner even mentioned the stone that was used to build the current site was from the same quarry as the stone from the original Sibley House.

Besides its history, the aspect that sets Mendota apart is it has no delivery to residents in the city. Residents come to the post office to pick up their mail in post office boxes.

“It’s actually quite unusual,” Nowacki said. “It’s the only one like that in the Twin Cities area that I can think of.” The reason? “This is what was determined when the post office was opened years ago,” he said.

Home delivery would be introduced if Mendota’s post office closes, Nowacki said. A carrier from West St. Paul would likely deliver to clusterboxes in Mendota.

If you are interested on weighing in on the fate of the Mendota Post Office, the meeting will be held tonight, December 6, at Henry Sibley High School (1897 Delaware Avenue in Mendota Heights) from 6:00-8:00 PM.