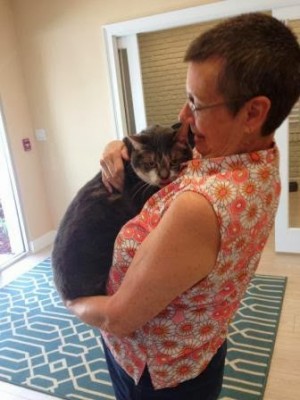 We have some wonderful four-legged neighbors here at Gulf Gate, and we would like to introduce you to two adorable cats named Benjamin and Buttons. They both live with Heidi and Sheila, who have been residents at Gulf Gate Apartments since 2009.

Benjamin is a huge cat weighing twenty-seven pounds He likes to sleep with Sheila. He looks so big that you could almost mistake him for a dog. However, he has been following a weight loss diet and so far he has lost one pound.

Heidi used to take Buttons to health care facilities where he would sit with the patients and calm them until he got too heavy. Studies show that catsâ€™ purrs, depending on the frequency, can help in the healing of different parts of the human anatomy. Since polydactyl cats in particular are known for their good health and friendly personalities, Buttons was probably very good at his job! Who knows, perhaps Buttons one of the descendants of Earnest Hemingwayâ€™s polydactyl cat? Nearly 50 of the catâ€™s descendants live on Key West.