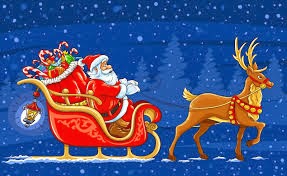 So Many Reasons To Celebrate!

The end of December is here and you know what that means: it’s time to party! There are so many reasons to celebrate coming up in the next week and a half. There’s Christmas, Kwanzaa, and New Year’s Eve! Here’s a little information about each of these festivities.

Christmas is an annual Christian holiday celebrated on December 25th that commemorates the birth of Jesus Christ. Jesus would come to be called the son of God. Jesusâ€™ story is detailed in the Bible recounting many miracles he performed from healing people with diseases, feeding 5,000 people with only 2 fish and 5 loaves of bread and even raising the dead.

Christmas traditions are also chock full of references to Santa Claus. Bishop Nicholas of Smyrna, who lived in the 4th century A.D. in what is known today as Turkey, was a very wealthy and generous man who especially loved children. He was known to throw gifts into the houses of poor children in order to brighten their spirits. He was later titled Saint Nicholas, and became the patron saint of children and seafarers. His story evolved into the legend of Santa Claus â€“ the jolly man who brings gifts to children all over the world on Christmas Eve.

â€¢Most of Santaâ€™s reindeer have male-sounding names, such as Blitzer, Comet, and Cupid. However, male reindeer shed their antlers around Christmas, so the reindeer pulling Santaâ€™s sleigh are likely not male, but female.

â€¢Christmas trees have been sold in the U.S. since 1850, the trees are usually grown for about 15 years before they are sold.

â€¢Mistletoe (Viscum album) is from the Anglo-Saxon word misteltan, which means â€œlittle dung twigâ€ because the plant spreads though bird droppings.

â€¢The colors of Kwanzaa are black, red and green as noted above and can be utilized in decorations for Kwanzaa. Also decorations should include traditional African items, i.e., African baskets, cloth patterns, art objects, harvest symbols, etc.

â€¢Kwanzaa can be celebrated by anyone. Kwanzaa is the holiday to remember African-American cultures.

â€¢Gifts are given mainly to children, but must always include a book and a heritage symbol.